How to Say Boca Raton

Our hometown gets a lot of mentions! Movies, songs, commercials and television, people love talking about Boca Raton. While we can count on some folks getting the pronunciation right... others may need a friendly reminder. This video and the poem below explains the importance of the "tone" in Raton.

A Time of Discovery

Now, if you've been wondering how to pronounce the name of your new city, a former City Attorney's legacy to us is this poem, in the form of a resolution:

From "Boca de Ratones", a quaint Spanish name,
Came "Boca Ratone" when the settlers came.
The "e" was discarded, and then it became
Just "Boca Raton". Now who can we blame?
The sound of "Raton" has not quite been the same.

"I've had it with short 'o'," said Councilman Mac,
"It grates on my ear and it throws me off track.
There must be a means of us to fight back,
Proclaim the Right Way, and counterattack!"

Now banned is short "o" as in con or baton,
Or Parthenon, Rubicon, Johnny or Ron.
The "o" in Raton's not like "a" in pecan.
We'll condone only "o" as in valedictorian.

And shunned is the "o" like a "u" as in son,
Or Washington, Arlington, London or none.
We want a long "o". In fact, two, for fun;
Put one in each half of the name and we're done.

Hereafter, forever, let's let it be known
To tourists and purists: "If you should intone
The name of the City of Boca Raton,
Please give it long "o" as in Old San Antone,
Or pinecone, or cornpone, postpone and rezone.

With Special Thanks to M.A. Galbraith 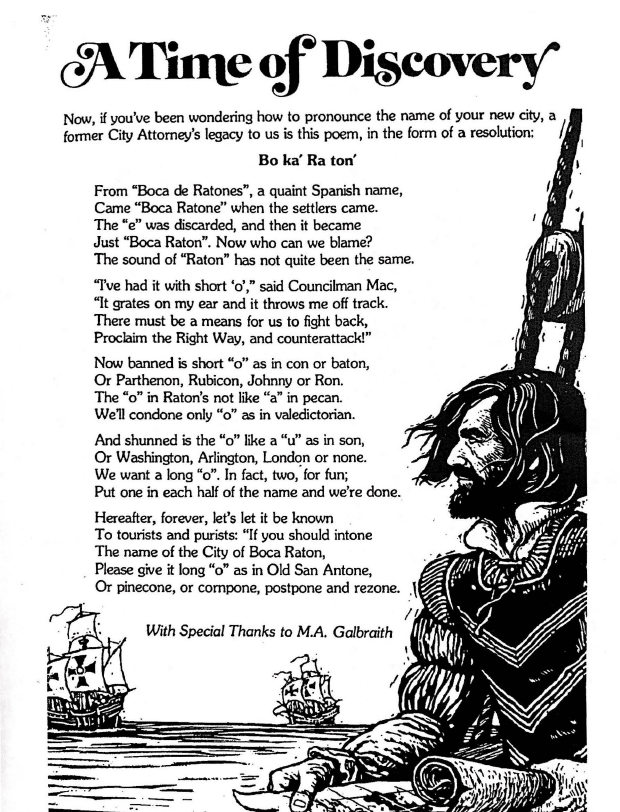