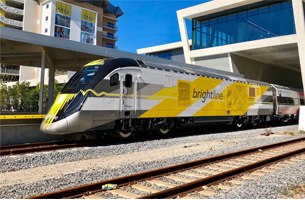 The City of Boca Raton was recently awarded a $16,350,000 grant from the US Department of Transportation (DOT). The Consolidated Rail Infrastructure and Safety Improvement (CRISI) grant funds will be used for the construction of the Brightline Train Station and corresponding parking garage, which was approved to be built on the east side of Boca Raton’s Downtown Library.

As part of the grant agreement, the City will provide a local match not to exceed $9.9 million with an additional match to be funded by Brightline. The $46 million project, which is anticipated to open in mid-2022, will bring positive economic benefits and jobs during a critical time of Covid-19 recovery and reopening, as well as long term. The project is expected to create nearly 500 new construction jobs and nearly 40 permanent jobs in the City and will provide increased mobility to regional jobs as well.

“This major grant from the Federal Railroad Administration will improve mobility, connectivity, and safety, while reducing emissions," noted Mayor Scott Singer. “The public-private partnership we’ve created and developed with Brightline will advance the long-term future of our thriving, progressive city. Many residents and businesses see this opportunity as a game changer for Boca Raton."

Brightline will build the train station on a 1.8-acre site near Palmetto Park Road and Dixie Highway, as a rail-ready connection to the $4 billion, 170-mile intercity train system. The City will fund most of the of the design and construction of a 455-car parking garage for train guests and the public.

“This is an important milestone for the Boca Raton station, and we are thankful for our Florida elected officials who supported this effort,” said Patrick Goddard, President of Brightline. “Boca Raton is a key component of our future system, and this station will serve as a catalyst for economic growth by creating jobs and bringing new visitors and spending to the area.”

A meeting was held in mid-February with City staff to review preliminary plans for the Boca Brightline station. Comments on the preliminary plans and direction on the application process was provided to representatives of Brightline/Virgin Trains USA for their upcoming site plan application submittal. Once a formal application has been submitted and staff comments have been addressed, agenda packages for Planning and Zoning Board and City Council public hearings can be prepared.

Plans for a temporary parking lot are being permitted.

An agreement with the Junior League of Boca Raton for a community garden at Meadows Park will come before the City Council as a resolution in March 2020.

Boca Raton City Council approved a long-term lease with Brightline, soon to be Virgin Trains (VTUSA), with a unanimous 5-0 vote at the December 10 City Council Meeting. The lease agreement includes the construction of a train station and parking garage on a 1.8-acre site near the City’s Downtown Library. Boca Raton will be the third new station in the company’s south corridor, joining Aventura and PortMiami in connecting the privately-operated, intercity rail system. Current stations and stops include West Palm Beach, Ft. Lauderdale and Miami.

Brightline will begin building the train station, which it will fully fund and operate in 2020, as a rail-ready connection to the $5 billion, 170-mile intercity train system. It is scheduled to be completed by 2023. The City will fund most of the of the design and construction of a 455-car parking garage for train guests and the public. Brightline will be responsible for all the operating expenses of the garage and the parties will split the profits. Library visitors will have dedicated, covered, parking on the first floor, which will be complimentary.

We work to comply with 2.1 A and AA website accessibility standards. If you are having difficulty accessing these documents or request them in an ADA compliant format, don’t hesitate to contact the City Clerk at brcityclerk@myboca.us  or 561-393-7740.

A final public hearing on proposed long term lease is scheduled for Tuesday, December 10, 2019 at 6 pm in the Council Chambers at City Hall.

If you are interested in viewing the lease agreement and supporting documents, you can do so at JustFoia Public Documents Request #2019-6168.
We work to comply with 2.1 A and AA website accessibility standards. If you are having difficulty accessing these documents or request them in an ADA compliant format, don’t hesitate to contact the City Clerk at brcityclerk@myboca.us  or 561-393-7740.

At a lengthy workshop and public discussion on Tuesday, November 12, 2019, the details of a long term lease for City-Owned property were reviewed. Stakeholders had an opportunity to weigh in with concerns and expressions of support, and City staff, along with VTUSA representatives, committed to working closely to clarify lease details based on feedback from the City Council. A City Ordinance authorizes a long term lease, and Ordinance No. 5509, proposing a long-term lease between the City and Brightline/Virgin Trains (VTUSA), was introduced at the City Council meeting on Wednesday, November 13, 2019. The long-term lease is for a train station and parking garage on the site of the current community garden and Downtown Library parking lot. The Planning & Zoning Board recommended approval of the Ordinance on November 21, 2019.  A final public hearing will take place on December 10, 2019.

VTUSA representatives answered questions and addressed concerns at the 11/12 workshop.  Stakeholders, including neighbors, business owners, the Friends of the Library, Library Commons neighbors and the Junior League of Boca Raton expressed support, concerns and asked questions. Opportunities for additional public input will continue prior to December 10, 2019.

Questions and comments can be addressed to communications@myboca.us.

You can view the PowerPoint presentation here:

At the City Council meeting on Tuesday, September, 24, 2019, Virgin Trains USA (VTUSA) representatives gave a second presentation on the proposed train station and parking garage on the site of the current community garden and downtown library parking lot. New details emerged as representatives presented a summary of plans and reviewed their discussions with stakeholders including neighbors, the Friends of the Library and the Junior League of Boca Raton.  A summary of the negotiation points presented by VTUSA is as follows:

Positive discussion with residents and council members ended with direction to City staff to continue negotiating with VTUSA as they incorporate community feedback into their concepts, designs and renderings for the project. You can watch the presentation on the City’s website. 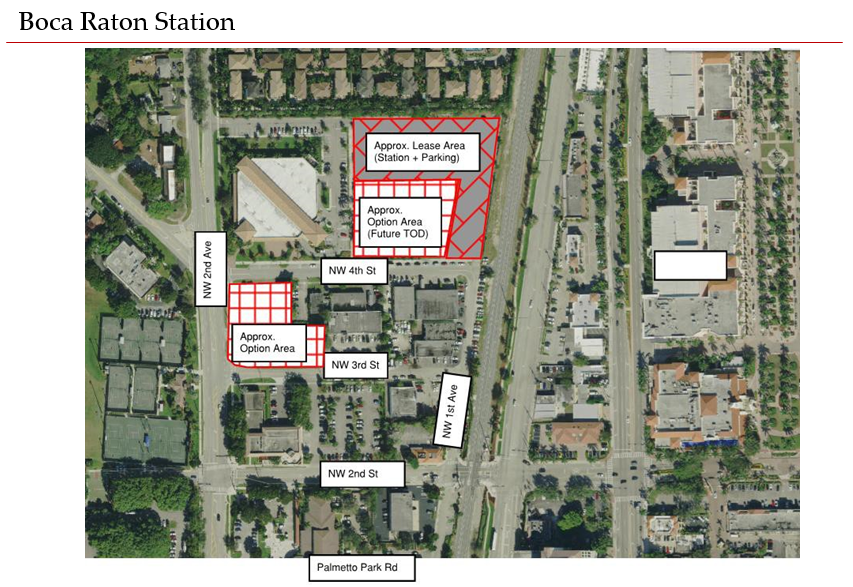 After Boca Raton expressed an interest in the possibility of having a Brightline (soon to be Virgin Trains USA-VTUSA) station in its downtown, VTUSA representatives confirmed that they would like to deliver train service to Boca Raton in the near future.

In a letter (Virgin letter PDF) to Mayor Scott Singer on July 19, Patrick Goddard, President of Virgin Trains USA Florida, LLC, indicated that Boca Raton is one of the cities that VTUSA has carefully studied, and that the company would like to work with the City to finalize an agreement that would deliver train service to Boca Raton.

As a first step, VTUSA laid out what it was willing to commit to the project and what is would like the City to provide.

In exchange for the above, VTUSA seeks the following from the City:

VTUSA representatives followed up with a visit to the City Council workshop on July 22 to discuss their plans and determine the next steps. Council members and VTUSA representatives heard from residents on a variety of issues including support and excitement about a station, concerns about train horns, concerns about library parking and questions about where the community garden would be relocated.

In the coming months, City staff will be working through the details of land valuation and possible conveyance, development and zoning issues, funding obligations, expenses and challenges that the project will present. As information is gathered, there will be opportunity for additional workshops, public meetings and input. Comments, questions or suggestions? Email communications@myboca.us.

Video from City Council workshop on July 22 below.